The beginning of my work period was pretty busy, not always with Summer of Code things. My mentor math and I had already talked about a lot of the things that needed to happen in order to move qaul.net away from an OLSR based routing protocol and make it extendable as well.

As previously hinted, we are using Rust for the protocol implementation, allowing for easy integrating into the existing C code as well as giving us the option to bit-by-bit rewrite the entire software in Rust, a much more modern and forgiving language. The first thing I tackled was to design a common API for the qaul.net library (libqaul) to use to talk to any networking backend. The routing code holds the state of the network and allows the sending of direct and flooded messages into a network (regardless of implementation under the hood). But to do that we also had to define some common characteristics for nodes and messages.

In the end, a lot of the work was sitting down, going through old notes and determining what our protocol was supposed to do. We looked at existing protocols a lot, thinking about extendability and backwards compatibility. The protocol itself will be binary encoded, although not yet sure which format. There is msgpack, cpnproto/ protobuf as well as some Rust specifics (Rust Object Notation to mention one) to look at. But that shouldn’t actually matter for now. All the versioning and extend-ability are being done in the struct level of the protocol, meaning that we could even switch binary encoding half way through. Keeping the encoding and decoding written in Rust, this is actually incredibly easy with the `From` traits. But I digress…

The protocl we ended up designing can handle any type that already exists in qaul.net, as well as allows for custom user extentions – messages that have a type field and a random binary message payload which allows plugins on both sides to interact with it.

So…so far the routing core isn’t doing much routing. But that’s okay, that comes later 🙂 With the networking API in place, we actually have something what we’ve wanted for the last 2 years: a hardware abstraction over any networking backend. The API is implemented in Rust as a trait (think like a Java interface), which makes implementations and even implementation specific code very easy.

The next thing on our todo list is working out how WiFi direct behaves. This is kinda disconnected from the rest of the project, but it’s something that has to happen. For this purpose I’ve written a small demo app (still WIP at the time of this writing), which will let us explore the way that WiFi direct works, how to build mesh groups, etc. These experiments are still ongoing, and we hope to have something to show until the end of the week. I will probably publish a small article on my blog about it – check it out (if you’re reading this in the future 😉 )

All in all, the amount of code written in the first section of GSoC2018 is medium. We have however answered a lot of open questions, have a good plan on how to continue and hope to have more to show off by the time of the next evaluation.

If you’re curious about the progress being made, check out the github repository.

Until next time,
Katharina

It’s been nearly a month since my last update on the PowQuty Live Log project and i would like to tell you, what has been done
so far and provide information on what will be done in the next month.

PowQuty got updated, to support Slack and mqtt event notification and can already be used in the current PowQuty version.
In addition to this, there have been some bug fixes during the last month and some new features were added.
On event occurrence the event gets stored in a csv file and each entry is displayed in the luci-app. To increase the usability,
a traffic light system will be added, which will show for each event type its occurrence time and show if the current values
are in violation of EN50160.

The event messages contain a times stamp, the duration of the event and updated event Type information, as well as event type related
information and GPS data. 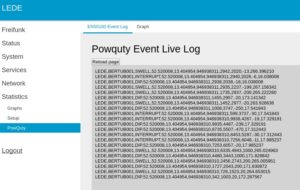 As receiving notifications or emails on every event occasion can get noisy, we decided to provide a weekly summary of the events in
addition to the regular notifications.
The user will be able to decide if he wants to receive this summary, every event, or both. We consider using the traffic light system
here as well, to increase the readability and enable users to understand the quality of their power supply network, without a lot of
knowledge of the EN50160 norm.
We discussed individual intervals and keep it in mind as a possible later feature.

As mentioned in my previous blog post, i am going to add a live log and notification system for
certain events to the power monitoring tool PowQuty. The first steps have been done and the
configuration has been extended.
Three types of notifications have been added to the configuration options during the first month of coding.
Namely email, slack and mqtt. Mqtt was in use before, but was extended to allow a second host and topic for
the power quality events.
The powquty configuration page was redesigned to use a separate tab for each notification option
to increase overview.

Power quality events, that cause a notification are:

As the power supply network in Berlin was not willing to provide such events an option for test measurement
input was needed. A file read flag for powqutyd was added and needs a little bit of clean up
before a pull request on the upstream powqutyd.
The library for the USB-oscilloscope provides the number of EN50160 events per measure cycle and
the kind of each event. As of now some basic slack notifications are added, which provide the event
type and the event start time from measurement start in milliseconds to the channel and team set
in the luci web interface or under /etc/conf/powquty.

In the notification the type of event is provided to allow the network administrator to react directly
to the changes, without to check the log any further.
The other notification options will be added and tested soon. 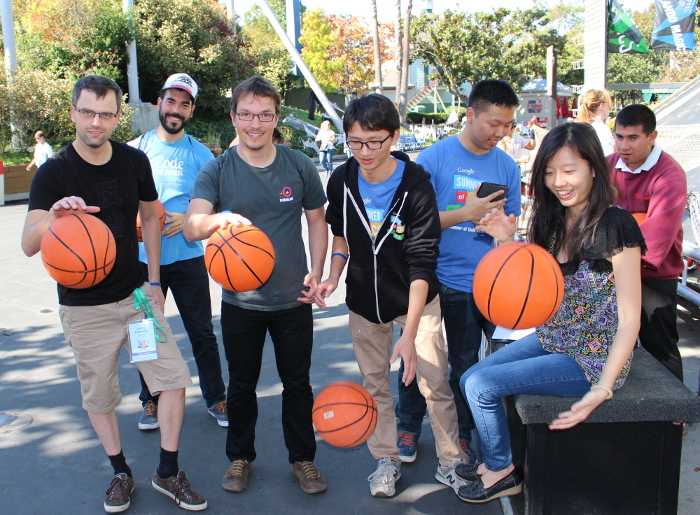 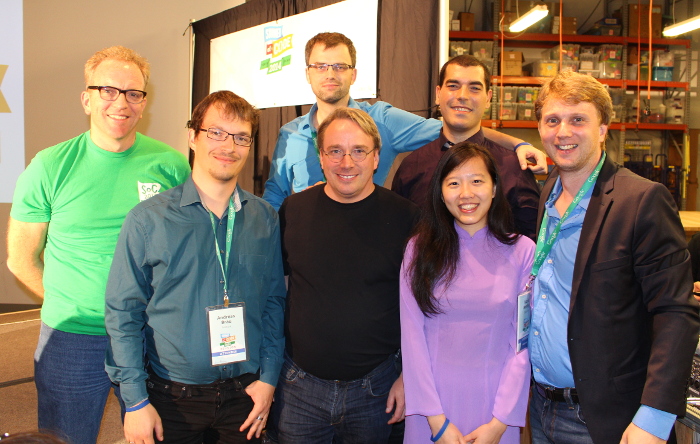 Freifunk attendees had the chance to discuss Community Networks with Linus Torvalds and Dirk Hohndel from Intel at the Google Mentor Summit. Linus said, it was impressive to see the growth of community networks around the world and it is exciting to see so many people working on Linux for embedded devices.

I am very happy to have participated do GSoC 2014, this experience have permitted to me to learn a lot about opensorce comminity and programming, i have learned also Lua programming language, while it seemed a little ugly  to me in the firsts times I ended up loving it.

This GSoC project permits to people installing Libre-Mesh on their devices and have device specific quirks already solved by the hardware detection module, without user intervention, while it permits to developers to write little modules to easly supports new hardwares and solve their quirks.

In particular in the second part of my GSoC I have improved hardware detection, in particular I have created a module to autoconfigure TL-WDR3600 and a module that permits to Libre-Mesh to detect wan port of a lot of routers taking advantage of the OpenWRT infrastructure.

While creating those new modules I have also realized how to improve general Libre-Mesh infrastructure and committed various improvement to the hardware-detection branch, that is now in the official repository ready for merging in develop branch.

Futhermore, during the last phase of this project I have optimized the code including modules I have written in the first period like usbradio detection module.

Obviously all this work have been possible thank to the help of the community that helped me in the whole coding period.

Before  starting coding I have been studying Lua programming language I read  some tutorials and I did some practical examples. After that, I went to  the Libre-Mesh architecture to understand better how it is done. When I  understood the programming pattern of LiMe I started coding.

First of all, I started creating a plug-in module for ath9k-htc based hardware. This module has been tested using a TP-LINK WDR3600 and two TL-WN722N USB radios. While working I have included an hotplug hook so the usb radios can be dynamically plugged and removed from the system while it’s running.

After  having the usbradio module almost done I have been working creating a  modular hardware detection plug-in for Libre-Mesh. This hardware  detection module have been completed with clean and configure functions. During the development of this part I have discovered some bugs in the file config.lua and I have solved it.

Currently, after doing some cleaning and debugging both modules are almost finished.

Obviously  all this work have been possible thank to the help of the community and  I hope to do my best during the rest of the coding period.

I will be happy to receive feedback or tips