Community mesh networkers from around the world are meeting in May 2014 at the c-base in Berlin.

There are Pre-Meetings May 28 and 29, the „official program“ starts 30th and last until June 1st. In fact the final version of the agenda will be created by attendents on-site. If you add your idea or wish to our wiki upfront, we can take care of your talk or workshop. Hacks sessions are taking place over the whole weekend.

This year we focus on topics like crypto, IPv6 and new services, but also like always latest firmware, new installation setups and last not least legal and political update plus public relations. Following the tradition we’ll have barbecue in the evening hours at Spree beach and we don’t charge entry fee. For more information and taking part, please click here: Wireless_Community_Weekend_2014 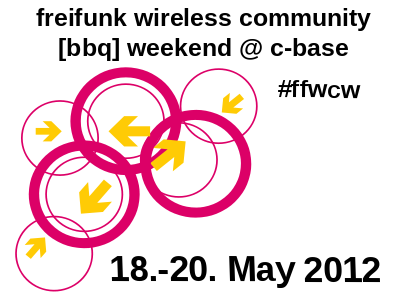 Starting Friday May 18 till Sunday May 20, 2012 freifunk.net, c-base and the German community invite you to the “Freifunk Wireless Community Weekend” at the c-base space station in Berlin.

Updated Info in the wiki: http://wiki.freifunk.net/Wireless_Community_Weekend_2012 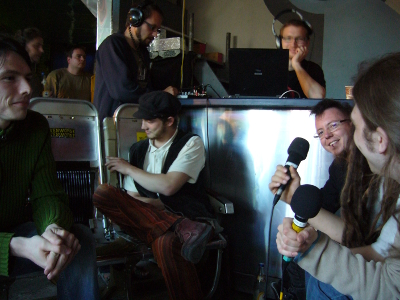 The archived broadcast from 2009-05-23 out of c-base can be found at http://tmkrth.de/SfdvW/ it’s called "SfdvW-meets-Rund.Freifunk-on-Wireless-Community-Weekend-2009-at-c-base.ogg" (~ 200 MB, ~ 2 h, ogg-Vorbis, german) It is kind of a audible snap from WCW with many interesting topics, and for it’s time of creation, it was contemporary.

The B.A.T.M.A.N.-developer team would
be happy to celebrate with YOU the 0.2 release of B.A.T.M.A.N. at
the C-Base (in Berlin). FYI, there will also be a free barrel of cool
beer waiting to be flushed. Version 0.2 can reasonably be called
stable now. It works quite performant, supports multiple interfaces,
has a low CPU-load, a robustly working algorithm underneath, and
autonomously negotiates UDP-Tunnels to GWs  which ultimately
enables long-term and stable internet connections. A number of users
reported quite excitedly about the amazing experiences they made with
this protocol. Well, we want to stay neutral so join in to hear them
and try batman for yourself.

Currently B.A.T.M.A.N is
available for Linux only. The ports for Mac OS-X and BSD have fallen
asleep and are waiting for a diligent bee … Maybe there will once
also exist a windows port.

Many thanks to all the people who
helped to realize this in such a short amount of time.

Merchandizing
^^^^^^^^^^^^^^^^^^^
We
are thinking about printing further T-shirts with the
B.A.T.M.A.N.-Logo (as you can see on http://open-mesh.net/batman
) and sell them at the cost of expenses. Unfortunately the price is
not clear by now but will be about or less than 15 Euro. If you are
interested please send a mail with your size and the limit you are
willing to pay.

Considerations for the parallel operation of
OLSR and
B.A.T.M.A.N.
^^^^^^^^^^^^^^^^^^^^^^^^^^^^^^^^^^^^^^^^^^^^^^
In
Berlin we are now facing a phase in which both routing protocols will
be used in parallel. Currently we are aware of one issue where this
can cause problems. This is in case of OLSR-Internet traffic passing
a dual-stack (OLSR and B.A.T.M.A.N.) node where the B.A.T.M.A.N
daemon is configured for tunneled GW selection. Then each
OLSR-towards-internet packet will be magically caught and warped to
the currently selected (and maybe several hops away) B.A.T.M.A.N. GW.
where the packets pop-up again and follow their usual path through
the internet to their final destination. This has caused confusion
since also programs like traceroute do not show the intermediate hops
which the packet has passed (tunnelled)  between the related
B.A.T.M.A.N. node and the GW.

This is because such a
dual-stack mesh node (where the B.A.T.M.A.N daemon is configured for
tunneled GW selection) consequently has two default routes. One due
to OLSR and another due to B.A.T.M.A.N.. The thing is, that both are
ending up in the same routing table and one of them (the latter) has
a higher priority than the other. So every packet passing along with
a destination address matching only the default entry of the routing
table will end up in the tunnel to the currently selected
B.A.T.M.A.N. GW.

The Internet-GW selection mode of
B.A.T.M.A.N. is optional and should be disabled or used with care
especially on nodes with a dedicated RF-postion (and such used by
many others as an intermediate hop) like churches and other high
buildings. Enduser using Notebooks or PDAs should be able to use this
feature without causing trouble.

Outlook
^^^^^^
In
order to make the parallel deployment of both protocols even more
smoothly, a number of new features have found their way into 0.3.
Then it will also be possible to maintain and use a the OLSR and the
B.A.T.M.A.N. default route in parallel.

Therefore we will also
release the first version of the upcoming B.A.T.M.A.N. generation
(0.3 alpha).

At the same time we already began working on the
next generation of B.A.T.M.A.N. which will be called B.A.T.M.A.N.
Advanced. It works on Layer 2 and creates a virtual network switch of
all nodes participating. It offers a bunch of new possibilities and
features which wait for you to be explored. To offer you a stable
plattform you can experiment with we will release 0.1 alpha. We will
also provide a set of tools (the B.A.T.M.A.N. toolchain – battool)
to bring you in the position to observe the magic and to debug your
setup or our daemon.  😉