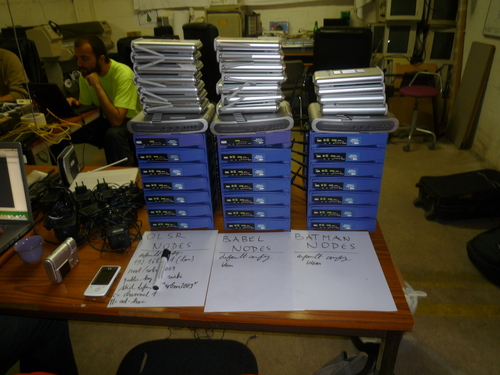 We setup some IRC meetings to prepare the configuration: IP’s,
versions, and everything that took too much time at WBM v1. The
meetings will be held on the tuesdays of 15 and 22 September and 06
October at 21:00 CET on irc.freenode.net channel #hsbxl. People from
Brussels and around are invited to join us at the hackerspace.

The event is free. We’ll kindly ask you for a donation to cover some costs.

Space is limited, so we ask you to register in advance by registering:

24c3, Chaos Communication Congress: Aaron Kaplan from the OLSR developing team and member of the Austrian funkfeuer community had a short lightning talk on the recent improvements of the OLSR protocol, which they now call OLSR-NG.

The whole lightning talk session can be downloaded via the torrent network (torrents below).

Marek Lindner and Simon Wunderlich from the Berlin freifunk community gave a talk on Wireless Kernel Tweaking and the B.A.T.M.A.N. routing protocol at the 24c3 Chaos Communication Congress. The video is now available on the torrent network.

Kernel hacking definitely is the queen of coding but in order to bring mesh routing that one vital step further we had to conquer this, for us, unchartered territory. Working in the kernel itself is a tough and difficult task to manage, but the results and effectivity to be gained justify the long and hard road to success. We took on the mission to go down that road and the result is B.A.T.M.A.N. advanced which is a kernel land implementation of the B.A.T.M.A.N. mesh routing protocol specifically designed to manage Wireless MANs.

During the last years the number of deployed mesh networks has increased dramatically and their constant growth drove us around the edge of what we thought was possible. To cope with this rapid development we had to leave the slow and limited track of tweaking existing approaches and take an evolutionary step forward by porting the B.A.T.M.A.N. protocol into the kernel land and going down to layer 2. Using B.A.T.M.A.N. advanced as a showcase we will, in our lecture, deliver a detailed review on how one can go about developing linux kernel modules, give insights in what difficulties to expect and provide practical tips on how to go about this challenge without experiencing a damaging kernel freeze in due process.

We will describe what problems we faced migrating down to layer 2 and how we went about solving them for example how we moved away from the kernel routing and handle the actual routing and data transport in B.A.T.M.A.N. itself. Also moving to layer 2 meant to leave IPs behind and solely rely on MAC-routing enabling features like DHCP, IPX, IPv6, etc which up to now was not possible and therefore comes as a big plus. On the other hand there were little if none diagnostic tools at all for routing on that level so we had to go back one step and develop the tools we needed ourselves.

These and other things we will cover in our presentation and also give an outlook into the future of mesh-routing, which will bring it even closer to the source of wifi – the wireless stack and its drivers and thereby improving the overall performance even more.

The B.A.T.M.A.N.-developer team would
be happy to celebrate with YOU the 0.2 release of B.A.T.M.A.N. at
the C-Base (in Berlin). FYI, there will also be a free barrel of cool
beer waiting to be flushed. Version 0.2 can reasonably be called
stable now. It works quite performant, supports multiple interfaces,
has a low CPU-load, a robustly working algorithm underneath, and
autonomously negotiates UDP-Tunnels to GWs  which ultimately
enables long-term and stable internet connections. A number of users
reported quite excitedly about the amazing experiences they made with
this protocol. Well, we want to stay neutral so join in to hear them
and try batman for yourself.

Currently B.A.T.M.A.N is
available for Linux only. The ports for Mac OS-X and BSD have fallen
asleep and are waiting for a diligent bee … Maybe there will once
also exist a windows port.

Many thanks to all the people who
helped to realize this in such a short amount of time.

Merchandizing
^^^^^^^^^^^^^^^^^^^
We
are thinking about printing further T-shirts with the
B.A.T.M.A.N.-Logo (as you can see on http://open-mesh.net/batman
) and sell them at the cost of expenses. Unfortunately the price is
not clear by now but will be about or less than 15 Euro. If you are
interested please send a mail with your size and the limit you are
willing to pay.

Considerations for the parallel operation of
OLSR and
B.A.T.M.A.N.
^^^^^^^^^^^^^^^^^^^^^^^^^^^^^^^^^^^^^^^^^^^^^^
In
Berlin we are now facing a phase in which both routing protocols will
be used in parallel. Currently we are aware of one issue where this
can cause problems. This is in case of OLSR-Internet traffic passing
a dual-stack (OLSR and B.A.T.M.A.N.) node where the B.A.T.M.A.N
daemon is configured for tunneled GW selection. Then each
OLSR-towards-internet packet will be magically caught and warped to
the currently selected (and maybe several hops away) B.A.T.M.A.N. GW.
where the packets pop-up again and follow their usual path through
the internet to their final destination. This has caused confusion
since also programs like traceroute do not show the intermediate hops
which the packet has passed (tunnelled)  between the related
B.A.T.M.A.N. node and the GW.

This is because such a
dual-stack mesh node (where the B.A.T.M.A.N daemon is configured for
tunneled GW selection) consequently has two default routes. One due
to OLSR and another due to B.A.T.M.A.N.. The thing is, that both are
ending up in the same routing table and one of them (the latter) has
a higher priority than the other. So every packet passing along with
a destination address matching only the default entry of the routing
table will end up in the tunnel to the currently selected
B.A.T.M.A.N. GW.

The Internet-GW selection mode of
B.A.T.M.A.N. is optional and should be disabled or used with care
especially on nodes with a dedicated RF-postion (and such used by
many others as an intermediate hop) like churches and other high
buildings. Enduser using Notebooks or PDAs should be able to use this
feature without causing trouble.

Outlook
^^^^^^
In
order to make the parallel deployment of both protocols even more
smoothly, a number of new features have found their way into 0.3.
Then it will also be possible to maintain and use a the OLSR and the
B.A.T.M.A.N. default route in parallel.

Therefore we will also
release the first version of the upcoming B.A.T.M.A.N. generation
(0.3 alpha).

At the same time we already began working on the
next generation of B.A.T.M.A.N. which will be called B.A.T.M.A.N.
Advanced. It works on Layer 2 and creates a virtual network switch of
all nodes participating. It offers a bunch of new possibilities and
features which wait for you to be explored. To offer you a stable
plattform you can experiment with we will release 0.1 alpha. We will
also provide a set of tools (the B.A.T.M.A.N. toolchain – battool)
to bring you in the position to observe the magic and to debug your
setup or our daemon.  😉