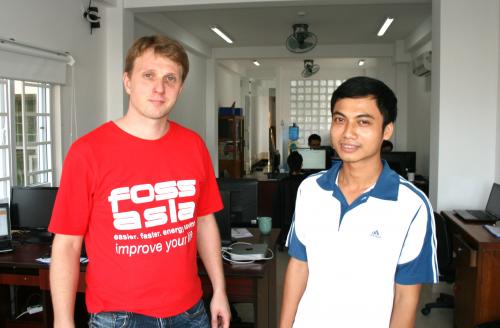 After several years of maintaining the Global Newswire, we have just launched a new site of Global.freifunk.net with updated feeds and cool map features. The new site uses the Managing News profile which is based on Drupal and developed by the folks from Development Seed. A big thanks goes to Thanh Nguyen from Vietnam, who set up the system together with me. As the other freifunk.net sites, the site is hosted at in-berlin.de.

Mario Behling and Thanh Nguyen working on freifunk.net in Vietnam
It took us a few days to figure out how to make it work for us. Some errors like an issue with sharing just came up, because we had not activated clean URLs, other errors, because the different servers we use run slightly different MySQL versions with the one the site is hosted on. Initially we wanted to update the previous site with the new profile. This worked generally, but some features just did not want to get working. The Managing News installation profile has a number of preconfigured modules. After taking a week trying to figure it out, we went back to the start and took another way. We chose to use a fresh install and moved the content of the previous site with the node exporter module. While the old content does not show up in the history anymore now, it can still be found through the search.

To geolocate places in articles we use Yahoo Placemaker, which seems to give a good outcome when tagging places in articles. As we have a rather large number of feeds that need to be checked and updated, we need to run cron every few minutes in order to avoid time outs.
Previously, we also had a special German news site focusing on the German speaking freifunk community. As hits on this website have been rather low over the last two years, we have closed that site and redirected it to the international news site saving us time to focus on one system.
So, here it is, the new Freifunk News Site. One thing I personally like is the embed feature that lets you embed any feed into your site. Please check it out and tell us which cool new features you like. 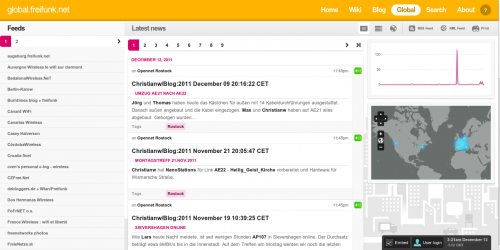 If you would like us to include your feed, please add it to the wiki page on the freifunk wiki. We will check here from time to time and add feeds to the newswire.
Links:
* http://global.freifunk.net
* http://managingnews.com
* http://in-berlin.de
* http://wiki.freifunk.net/Global.freifunk.net

L-VN is a tool for overlay network creation based on IP in UDP encapsulation performed in Kernel space without encryption/authentication of the tunneled packets. The idea of L-VN is to exploit the IP/UDP encapsulation kernel module proposed for GSoC 2010  to develop a VPN/Overlay tool based on IP/UDP encapsulation performed in kernel space with no “security services” for the encapsulated packets (i.e. no confidentiality, no authentication). The goal is to provide a lightweight overlay network tool that might be preferable to other VPN/Overlay solutions for devices with limited computational resources. The project is a Freifunk-Ninux.org proposal, and is sponsored by the Google Summer of Code 2011 program.

The code is available through the ninux SVN repository, at the path: https://svn.ninux.org/svn/ninuxdeveloping/ipudp/v02. Comments, remarks or any kind of support will be truly appreciated.

This article appeared first on Ninux.org:

Do wireless communities around the world really need another map server? Here in Ninux we believe that the answer is yes!

Enter Nodeshot an open source wireless community map server written in python and based on django, focused on ease of useand performance.

Why a new map server? Mainly because we had some precise needs that the current open source map servers can’t satisfy easily:

Instead of modifying and hacking the existing alternatives we decided to make a new one, trying to keep the code clean and well commented (which was one of the hardest tasks).

The frontend is built in HTML5 and it does an intensive use of jQuery and the Google Map API.

The backend is based on the django admin and it permits to easily administer the app.

These are the main features of the nodeshot:

During the development we used github to commit changes and several merges have occurred in some cases when different developers were working to fix some issues.

The project has revealed to be more complex than what was expected but at the same time has been really engaging and fun.

There is still work to do though, actually we are translating and optimizing the app. We’ll keep working on nodeshot so that we can arrive quickly to a stable and performant release, we hope we’ll attract new developers from all around the world that will help us to push forward this new open source project!

Meanwhile, you can check the demo and you can download the source code on github.

This article appeared first on the website of Ninux.org:

I’m writing about the results achieved with my Google Summer of Code project, for the Ninux community, under the umbrella of Freifunk (I thank them both for the opportunity they gave me).

Briefly it consisted in developing a video chat feature for Diaspora*, a distributed social network.

This project has received a very big feedback and appreciations from the entire Diaspora community, including the core team, who helped and supported me during the development.

Basically, it provides two new functionalities to the Diaspora engine:

Both have been developed in Javascript, with some Rails code. It usesStrophe.js library for the textual chat, based on XMPP Over BOSH standard, and a self-made extension of it to realize Jingleprotocol.
The project includes a custom ejabberd module in Erlang for the integration of ejabberd/diaspora databases, an Actionscript part for the video chat stuff and an external authentication script written in Ruby used by ejabberd to authenticate users from Diaspora.
The project has been split in two pull requests, and we’re currently fixing them before merge with master repository: [1],  [2].

Source code can be found at https://github.com/vcuculo/diaspora, under “jabber” and “video_chat” branches.

I hope it will be soon merged and improved by me and the community, to make it available on every Diaspora* pod!

**This article appeared first on the website of Ninux, our friends from Italy: http://blog.ninux.org/2011/08/30/gsoc-2011-videochat-for-diaspora/

The Ninux community, under the umbrella of Freifunk, developed four awesome open-source projects for the Google Summer of Code program 2011: a front-end for RadioMate, a new mapserver (called nodeshot), a video and chat extension to the social networking engine Diaspora* and a new tunneling tool.

In this post I will write about RadioMate, the project I was involved in. Then posts on the other projects will follow!

There are many web-radio projects that are closely involved in the world of Community Networks: in Rome Fusoradio and Radio Sonarare an active part of the community and relay on the ninux network for their streaming, in Leipzig Radio Blau (which transmits also in FM) gives big spaces to the Freifunk project, or RadioCona in Ljubljana, where the Wlan Slovenija project is based.

Often these web radios have to relay on closed-source software platforms as the available open-source solutions don’t fit their needs.

RadioMate is a free (as in freedom) community-wise Web-radio management system. Some of its features are:

For the techies, the engine is based on liquidsoap, written in Python, and easily extendable through liquidsoap scripts. It exports a JSON API which is exploited by the Javascript (jQuery) based Web frontend. Source code and documentation can be found at radiomate.org.

Of course there is still work to do, but I hope that this software will be soon used by our friends running webradios!

As we say in Rome:Daje!
Clauz

This article appeared first on the website of Ninux.org:

Starting Friday June 3 till Sunday June 5, 2011 freifunk.net, c-base and the German community invite you to the “Freifunk Wireless Community Weekend” at the c-base space station in Berlin.

Many wifi activists has lockers and shelfs full of wifi equipment, boards, enclosures, wifi cards, antennas, cables and pigtails. A lot of wifi stuff just sits there and wait to be used or just gets dusty. If this equipment still works and can be used better, lets re-use it and share it to the wifi community.

Zioproto posted a cool video with some impressions from Battle of the Mesh v4. Enjoy!

Freifunk has been is again a mentoring organization for Google Summer of Code.
We are looking forward to more people joining
development. Please propose ideas for the program on our idea page.
Students wishing to apply, please check out the Student Check List
in the wiki and join us on irc://irc.fu-berlin.de/#freifun and freenode.net #freifunk.

You can also use the OpenWrt mailing list for discussing Freifunk specific plugins and tools with OpenWrt devevlopers: https://lists.openwrt.org/mailman/listinfo/openwrt-devel

The application period starts on March 28, 2011. Please use the time to discuss your ideas beforehand already.