this is the first status report before the initial evaluation. It will cover the current status and my plans for the next weeks. As planed, I manged to set up a demo instance of the update-server and a working version of the luci web-view. Both will be covered later in this article.

What has been done

The project can be splittet in two parts, the Luci web-view, written in HTML and JavaScript and the update-server, currently implemented with Python 3.

The button fires an image request to the server based on retrieved system information (installed distribution, packages, version). The server returns status codes as described in the git repository.

During the build phase the JavaScript pools the Webserver to see the current status. Currently it’s queued, building or created. The view will be updated accordingly.

Once the image is created a flash button appears, a click will download the created image from the server and uploads it to the router. Once done, a new created ubus call will initiate a sysupgrade keeping all settings.

After a reboot the new release is installed (see bottom right).

The web-view uses JavaScript with XMLHTTP Requests, no external library is used. Theattended-sysupgrade packages is currently less than 5KB in size. As I had no JavaScript experience before the project there may be lots of optimizations missing, these will be added during the next weeks.

To upload the image to the router, the package cgi-io is used, saving the sysupgrade.bin in /tmp.

The updates server is as well splittet in three parts. The request handling, a simple cli and the image building.

Currently a simple flask server provides the needed routing of /update-request, image-request and download. All requests will be checked for sanity and only then processed. If the request is valid a database lookup will check if the image was build before or is currently building. If none of these, a build job is added to the queue.

Whatever action is performed, the server tells the web interface  the current status.

Currently the flask server will run in a gunicorn instance with any number of worker threads. Gunicorn runs behind a Nginx which handles the image download as well: /download will only increase a counter and redirect to a /static folder full of created images.

The CLI helps to setup the update server. It has commands to initially setup the database, fill it with data, setup Imagebuilders and update package lists. Right now the Imgebuilders initialization is automated but not jet on demand, only triggered by command line.

In a future release the CLI could also create images for testing, clean the update server and more. It may be used by cronjobs later.

Next to the request handling a very simple build manger takes care of the serialization of image builds. The manager open images builders and create the image. On success the database will be updated and the image requests will show the image URL.

The build manger could delegate workers to build in parallel. The master/worker setup is possible but not planed. Depending on practical experience this feature will be added.

I ran the ansible found here against a demo server and is currently usable to create images for LEDE. To test the image creating process you can use a simple bash script. Please keep in mind that building is limited to supported devices. The demo server does not automatically follows the git repository. 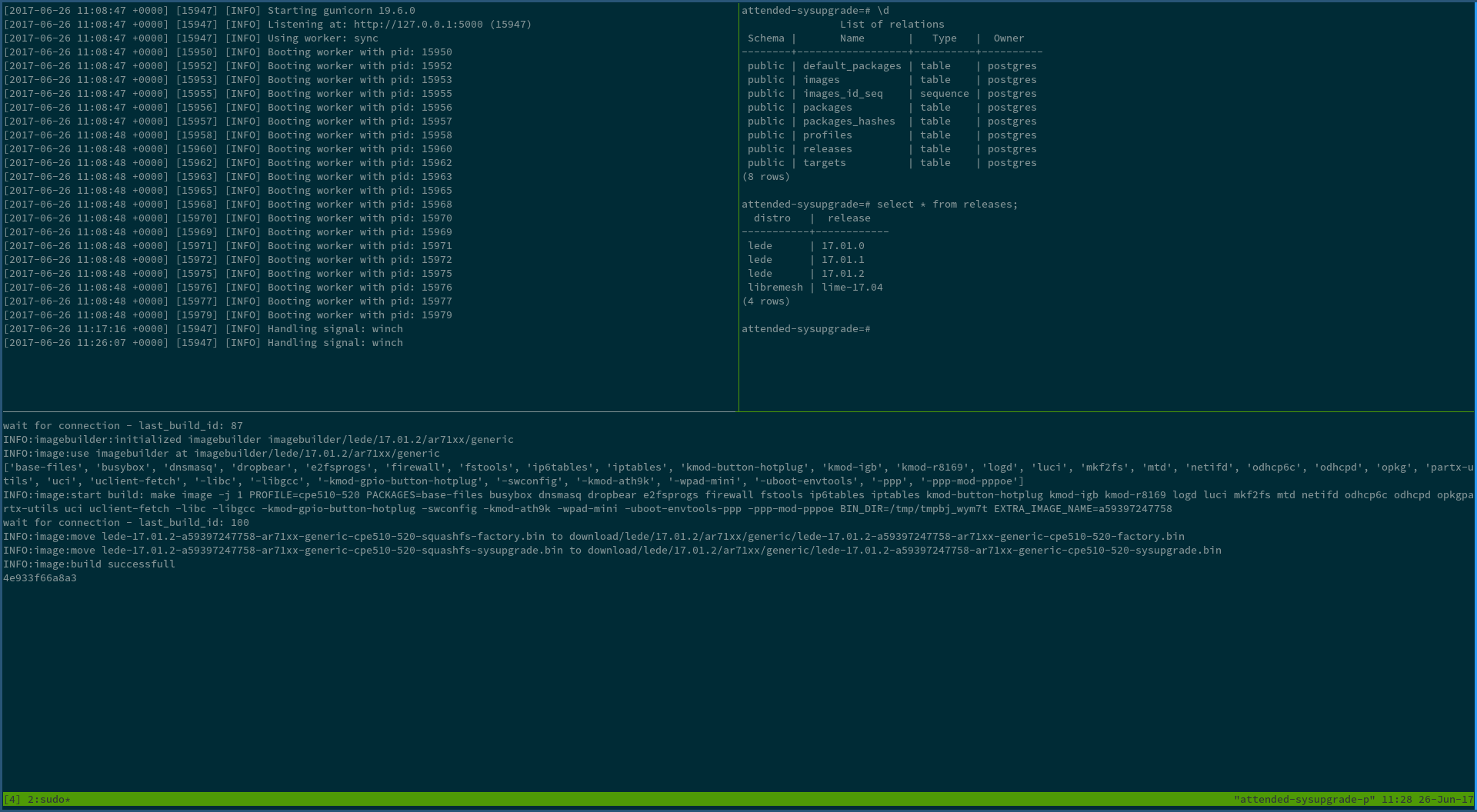 The demo server is the cheapest Google VM I could find. If you have any advise where to go, please let me know!