Skip to content
Hi together,
Now I am coming to my 1 phase: evaluation. An introduction into the geolocator (Software defined GPS) has been already done last month. You can find it here [0]. In the previously mentioned blog post I have told about the 3 main sub-projects: web backend, gps-share, LEDE Package. In this post I will show you what I have done in each sub-project. Beginning with the web backend:

This sub-project should replace the old web backend of the openwifi.su project.
The old backend is split into various programs and scripts, grown over years. First of all I started with the part of receiving positions. This program is written in ruby and just parses the URL as a string. So users can simply call
and will receive latitude and longitude. The BSSIDs in the above URL are from surrounded WiFi networks. The old ruby code just drops all characters up to the last splash and splits the BSSIDs by comma. The result array will be integrated into and SQL command which returns a position for each BSSID. The code for this part is non public, because the developer doesnt want to risk attacks by hackers. I started porting the old ruby code to golang. Currently I am working on the database connection. So in the next few days the backwards compatibility will be finished. The current code can be found here [1].

gps-share is a software which provides GPS informations in the local network, written in rust [2]. It supports many GPS hardwares and shares the GPS informations over a network-NEMA format. Zeeshan Ali, the maintainer of geoclue, has already released a first version of gps-share [3]. Zeeshan and I discussed on the Mozilla Location Service Mailing-list about that project [4] . As I told it in the last blogpost, the gps-share is an alternate project to the original idea. This helps geoclue to work directly with GPS-hardware´s and builds an defined interface via dbus to receive geopositions over GPS hardware, surrounding WiFis or other ways.

The last  sub-project is a new LEDE-package, which provides geo positions received by their surrounding WIFIs. I have already built a first version of that package here [5]. I also started discussing with maintainers of the gluon framework, which is a popular framework in the Freifunk community. My plan is to integrate the goelocator also in gluon so routers can automatically receive its position. A first draft can be seen here: 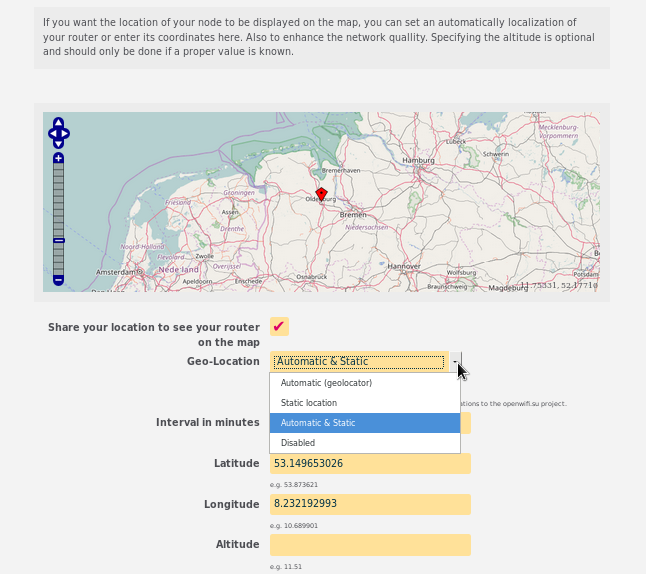 An idea is that the Web interface of the router could detect installed packages and provide their options on the Web interface. This means, that in the drop down menu, the option “Automatic (geolocator)” will only be shown if the package geolocator is installed. This makes it easier for local (freifunk) communities to integrate new options of position detection into their firmware.
This is also my last week of my exam period. Now I can work full time on the project. Next plans are improving functionality of the new backend, building CI unit test for the new planed API and building the Mozilla Location Service communication interface to sync the requests between MLS and openwifi.su.
[0] https://blog.freifunk.net/2017/05/29/geolocator-software-defined-gps/
[1] https://github.com/openwifi-su/sgps-core
[2] https://github.com/zeenix/gps-share
[3] https://www.golem.de/news/gps-share-gnome-anwendung-teilt-gps-daten-im-lan-1705-128099.html
[4] https://location.services.mozilla.com/
[5] https://git.nordwest.freifunk.net/ffnw-firmware/packages/tree/master/ffnw-node-info/files/lib/ffnw/geolocator