During the last few weeks I jumped into LibreNet6 and started on setting up a local testbed. With a couple of routers and an virtual machine with real a IPv6 subnet I followed the current Setup (Spanish) guide and eventually got it running. The process had various stumbling stones and is rather unpleasant to setup. In a future setup I’ll try to make the setup as simple as possible, only involving the installation of a single package.

Simply said, LibreNet6 allows using the IPv6 functionality of LibreMesh (LiMe). With a single configuration file at /etc/config/lime it’s possible to set nearly all functionality of the LiMe framework, from access points, mesh connects, used addresses to activated routing protocols. In the default configuration all nodes have a /64 IPv6 subnet defined which is pseudo randomly generated based on the hash of the defined network name, which thereby all nodes of a (Layer2) mesh cloud share. The subnet is part of Altermundi’s address space, enabling in theory public IPv6 addresses to all nodes and clients of the LiMe cloud. However, most mesh gateways don’t have a direct connection to Altermundi.

There comes LibreNet6, it connects via a Tinc mesh multiple community networks which only have Internet access via a NATed IPv4 address. Only the cloud gateways (CG) have to use babeld, within the mesh network other routing protocols can be used. All the CG has to do is announce public IPv6 uplink to the rest of it’s cloud. Once multiple mesh networks are linked together their clients can start connecting directly via IPv6. A feature of Tinc is to perform NAT traversal so both CG’s may connect directly with one another to avoid routing all traffic over the IPv6 server. 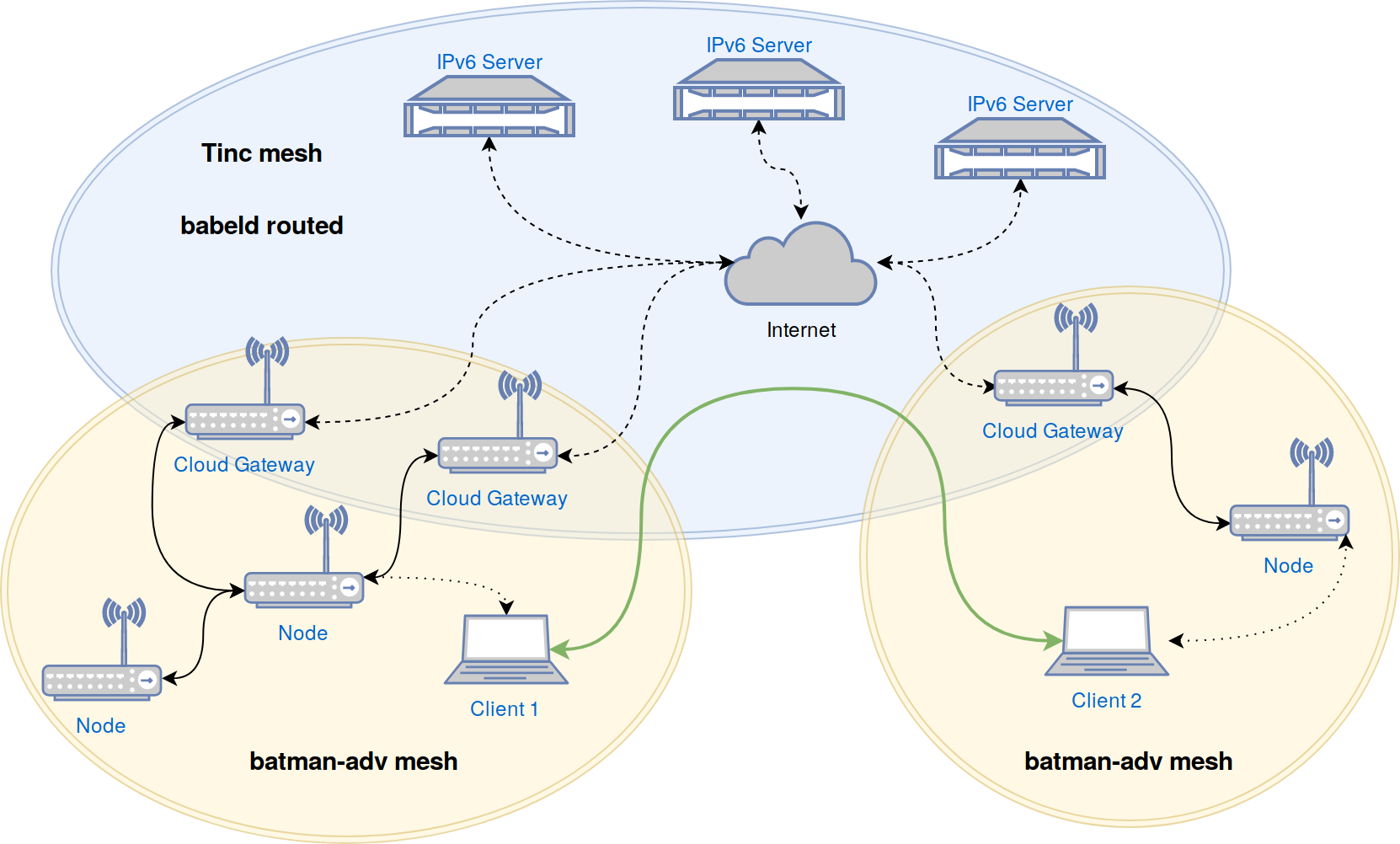 One of the advantages of LibreNet6 is to handle multiple IPv6 server and CG at the same time. Babeld allows to choose the fastest connection within the Tinc mesh and in mesh clouds the used mesh routing protocol decides which CG to take.

I’m not completely new to the LiMe code and contributed on various end within the last years (motivated by my last years GSoC). Developing and testing new software were always tedious as all packages had to be created individually per targets architecture. To speed up this process I spent some time on settings up automatic snapshot builds for LiMe take care of automatic updating of LiMe snapshot repository. As nearly all LiMe code is Lua, it’s unnecessary to compile packages for all targets. To have a single package running on all architectures, the PKGARCH:=all settings can be used in packages Makefiles, and so I did. As a result, LiMe has now CI and a constantly updated snapshot repository, this will allow me (and other LiMe devs) to accelerate the development and testing of new functionality and packages!

Evaluation of the current LibreNet6 state

With the previously mentioned testbed I tried some new software and came up with an easier setup which stays compatible with already deployed connections:

So far I spent most of the time on understanding LibreNet6, babeld, Tinc and CI and setting up a running testbed. Next week I’ll create a LiMe package to be installed on CG’s, setting up babeld and Tinc. Also I’ll dig into the lime-app to understand the web framework and offer a simple interface for users. Lastly I’ll write a guide for server owners how they can setup the IPv6 server on a Debian system, using real IPv6 or 6to4 tunnels in case only a public IPv4 is available.