Hello everyone!
First things first so here is the code that I’ve written. You can find it in these repositories:
OpenWifiCore (core server application)
OpenWifiFeed (LEDE/OpenWRT feed with boot flasher and boot notifier)
OpenWifiWeb (web frontend)
OpenWifiTemplates (old templating system)
OpenWifiLocation (plugin that detects the location of a node via google location api and nearby wifi aps)

I also worked together with Arne to interact with his SDWN controller and agent. We created a small website that informs you on how to use the two tools together. (As I’m writing this it is still somewhat under construction. But I hope everything will be there soon 🙂 ) Furthermore there is also specific documentation (WIP) for OpenWifi here.

To be a little more precise here is the list of commits that have been done:

Overview about what has been done

Everything that has been done can be put into 4 categories: authentication/authorization, api, database-model and infrastructure. I want to give you a brief overview of all these categories.

Docker images are now build automatically via TravisCI and deployed on docker hub. You can find more information in my first evaluation blog post. How to use the docker images is described in the documentation. These images are also used for testing.

The graph based database model was made a first class citizen. It now automatically converts between the internal representation and the representation needed to sync to the AP. It is also now possible to create new configurations and create links between these. The query format is also used for authentication/authorization. 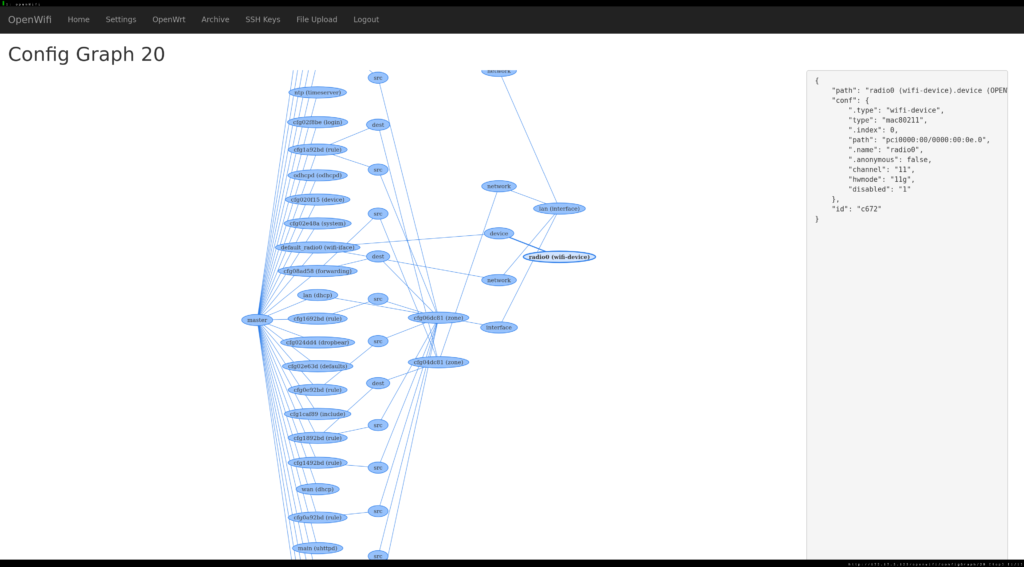 Providing all the new functionality via a REST style API was the focus of this google summer of code (web views are still needed for quite some things). It is used for managing users, services, nodes and changing the graph based configuration model. It is described in the documentation.

The concept of having a service is also something new that I created together with Arne in august. If an external application needs to make changes to configurations of specific nodes it can just subscribe as a service. The service takes a list of database queries, a name and a shell script with a compare string. If the output (stdout) of the shell scripts matches the compare value the node gets the name of the service as it’s capability (also something that was added during this GSoC). When a node has the capability the queries are applied to it’s config in a regular interval by the job-server.

This was the biggest part of this GSoC. There are two ways of giving access to a node – either by giving access to a path string of a configuration or by allowing a specific database query. For more details see my second evaluation blog post.

There were quite some challenges as this system allows for some really complex access configurations and there are still some things to improve here. (see below)

What else? Aka the smaller bits

There were also some smaller bits that were done that don’t really fit the other categories. The boot-notifier and boot-flasher scripts were improved, a way to abstract communication with the nodes was started (see documentation), some small UI fixes to the graph view were done. And probably a lot of other smaller fixes I forgot 😉

Future – or what needs to be done

I guess the most important thing is to get all of these new features exposed via the web views. That shouldn’t be to hard but wasn’t the highest priority during GSoC. Everything related to the graph should be made aware of all possible path strings that lead to a configuration. Currently just one string is used – this should be lists! The fine grained authorization needs some more testing and I also want to improve the pattern matching by combining the regular expressions you could use to describe a path string. This could be done with greenery. The authorization right now is also just focused on nodes and configuration – it would be nice to restrict access to some views and actions. For example restrict the access to LUCI, sshkeys or executing commands on a node. Furthermore there should be a per node option where “the truth” of a config lies (like if there is a difference between the actual node configuration and the configuration on the server which one is considered the one to go with) – than it would also be nice to disable the sync for some nodes (if manual changes on the node need to be made for example).make

A big thanks goes out to Google for organizing something cool as the Google Summer of Code, to Freifunk for letting me do this project with them and last but not least Julius for being my mentor!