In the last months some issues emerged with the original plan of my project.
After implementing topology export in NetJSON format for BIRD, I started investigating how to modify the timers of OSPF, and finally found that OSPF has a limitation regarding the timers, which states that all the routers on the same network must have the same timers. This is surprising, since the RFC supports specifying the timer in the messages, and thus it would be trivial to have nodes with differentiated timers (as OLSR and other protocols do, for instance). Actually somewhere else in the RFC it is stated that even if the timers could be diversified, they must be used as a network-wide parameter, otherwise routers wont pair as neighbor. This issue is not easy to solve, and would break the compatibility with other OSPF implementations, thus, together with my mentor we decided to change the project on something that we could accomplish in the remaining time and that was still helpful for Wireless Communities.

Since many WCNs in Europe are still using OLSRv1 we’ve decided to implement PopRouting on it. The NetJSON plugin[1] is already available so we only had to implement the Timer’s plugin and the PRINCE plugin to communicate with it.

During this mont I’ve implemented and alpha version of the Pop-Routing plugin[2] for OLSRd. This plugin is quite simple, it listens to a specified port and it parse two commands : “/HelloTimer=xx.yy” and “/TcTimer=xx.yy”, where xx.yy are floating point numbers.

I’ve also implemented the Prince plugin[3] that communicate with OLSRd. It fetches the topology from the NetJSON plugin and it pushes the updated timers to the PopRouting Plugin.

The next month I am going to fix all the bugs I found, document the plugins and test Pop-Routing with NEPA test.

Despite those problems the implementation of NetJSON for OSPF is working and we hope it will be merged in the BIRD codebase soon.

During this month I have implemented the NetJSON plugin for BIRD. It exposes the topology of an OSPF Area using the network-graph format and thus allows Prince to fetch the topology and calculate the timer’s value.
I deployed a small testbed to debug my code using the network emulator called CORE [2]
Here you can see the testbed: 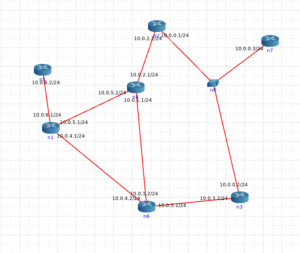 I’m currently working on this repository [3] and I’m looking forward to send a PR to BIRD.
I defined a new command in the bird’s cli: “show ospf topology netjson”. It returns a network-graph output that can be used by prince or by any other NetJSON[4] compatible software.
Here you can see the topology of the testbed using d3.js [5][6]. 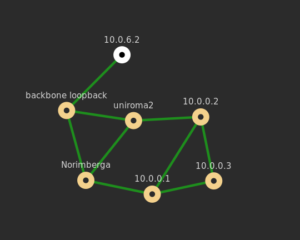 In this next coding period I will implement a plugin for Prince that interacts with BIRD. Unfortunately it uses a UNIX Domain socket instead of a network socket, so I’ll need to code the communication routines from scratch.

I’m Gabriele Gemmi, you may remeber me for… Implementing Pop-Routing[1]
This is the second time I participate in GSoC and first of all I’d like to thanks the organization for giving me this opportunity.
Last year I implemented PR for OLSR2. The daemon, called Prince [2], is now available in the LEDE and the OpenWRT feeds.

PR is an algorithm that calculate the betwenness centrality [3] of every nodes of a network and then uses this values to calculate the optimal message timers for the routing protocol on each node. In this way a central node will send messages more frequently and an outer one less frequently.
At the end the overall overhead of the network doesn’t change, but the convergence gets faster.

My project focuses on extending Prince functionalities to use Pop-Routing with OSPF. I decided to work with BIRD, since it’s written in C and it’s already available for OpenWRT/LEDE
In order to do this I need to develop 2 components:
— A plugin for BIRD that expose the OSPF topology in NetJSON and allows to update the timers
— A plugin for Prince that communicate with the BIRD plugin

I already started developing the former [4], and I’m looking forward to implement the latter.
I’ll keep reporting my updates here, so stay tuned if you wanna hear more.

Today has started the midterm evaluation, the deadline Is next Monday, so I have to show the work I have done ‘till now. It can be resumed in the following parts:

1) Refactoring of graph-parser and C Bindings

During the community bonding period I started working on the code of Quynh Nguyen’s M.Sc. Thesis. She wrote a C++ program capable of calculating the BC of every node of a topology [1]. I re-factored the code, and now it is a C/C++ shared Library [2]. I’ve also applied some OOP principles (Single responsibility and inheritance) and unit tests to make it more maintainable.

The interface of the library Is well defined and it can be re-used to implement another library to perform the same tasks (parsing the json and calculating the BC).

After I completed the library a started working on the main part of the project. the daemon. We decided to call it Prince in memory of the Popstar.

With these feature Prince is capable of pulling the topology, calculate the BC and Timers and push them back to the routing protocol daemon.

As you can see from this Issue [3], I’m going to use INI instead of this home-made format.

As I said before I moved to a specific plugin all the protocol specific methods (pulling the topology and pushing the timers), to keep the daemon light I decided to load this plugin dynamically at runtime. So if you specify “olsr” in the configuration file just the OLSRd specific plugin will be loaded.

At the moment I consider this an “alpha” version of Prince. In the next 2 months I’ll be working on it to make it stable and well tested. The next steps will be:

I am Gabriele from the Ninux community. I am participating in GSoC 2016 for the first time and I am very glad I have been accepted as a Student for Freifunk. I am from Florence, Italy. Here I’m studying Computer Science, soon I will graduate and I hope to use the results of this project to write my bachelor thesis.

Four years ago, with others community networks’ enthusiasts we have funded Ninux Firenze[1], the fist Wireless Community Network in Florence where I had the chance to learn how these networks work and to meet many others people interested in this field. The network is constantly growing, and now it counts almost 20 nodes. In May ’14 I have been for the first time to Wireless Battle of the Mesh in Leipzig where I met the Freifunk community. For this GSoC I will work on a project called PopRouting[2]:

OONF (OLSRv2) is a link state routing protocol. It works sending periodical messages to his neighbors with the aim of transmitting information about topology changes. With these information each node of the network is able to calculate the paths to reach any other destination. These messages are periodically generated, based on the configuration parameter that regulates the sending interval. A short period will make the network react rapidly but it will also cause a large overhead due to control messages. Pop Routing is a recent technique that takes advantage of the knowledge of the network topology to find the optimal value for the OONF’s timers. Using Pop Routing every node computes the “betweenness centrality” of every other node and uses it to calculate the optimal trade-off between convergence and overhead for its timers. The algorithm has been developed at the UniTN and the algorithm to compute the BC in C++ is available as free software. My goal is to code a daemon (in C) that is able to calculate autonomously the BC of the network and push it to OONF using the telnet plugin.

In this month of community bonding I have been to Wireless Battle of the Mesh v9 in Oporto(PT). There I met the OONF developers and we discussed how to implement this inside OONF. I also gave a presentation on the project. After the Battlemesh I started working on the algorithm developed by UniTN and I made a C/C++ library out of it [3].

Today I will start coding for the GSoC, stay tuned and I will give you more updates soon.