Skip to content
¡Hola!
I am a student of computer science, but most of my knowledge comes from my diy projects. I am a jack of all trades kind of a guy; I have tinkered with low level stuff like add-ons and fpgas,
but I also worked with everything UE4 gaming engine, blender and other high level programs. I like creating visual things such as music visualizations, graphs and other more interactive ways of displaying data. This summer I will help improve the visualization capabilities of nodewatcher.
My project has two main branches, improvement of existing graphs and developing a brand new way to visualize used IP space of nodewatcher. Nodewatcher has many graphs and a lot of data to visualize. Understanding the data is hard without the proper representation. My knowledge of d3.js will help me create interactive, smooth and slick graphs that will help improve the nodewatcher presentation of node data. Creating more dynamic and visually appealing graphs is important and very useful, especially for new users who might get lost in the data.
My second contribution would be a brand new map of the used IP space. At this moment nodewatcher doesn’t have any way to represent the IP pools that nodes are using. Looking at hundreds of subnets is hard to visualize and time consuming. This map would provide a way to show which space is already used and which isn’t.  I have already made a small prototype visualizing the wlanslo IP pools (Map). It takes a while to load as it has to draw over 7 thousand subnets, but when it’s done, you can clearly see which space is used and which isn’t. The map also provides a way to zoom in on different subnets of wlanslovenia giving a better look into how they are composed.
Reports about progress will be posted to developers mailing list (list).
Me, my sumbrero and I are ready for the summer of code 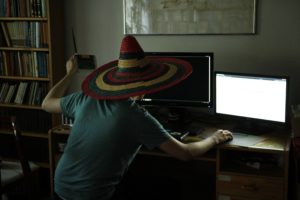