This year the “Battle of the Mesh” was hosted by the c-base community in Berlin. It was an awesome event, with amazing people coming from everywhere. I was able to present my project here, and it was exciting because many people was interested in. I also met some other students involved in the actual Google Summer of Code.

Unfortunately the week is over, and so is the bonding period.

Description of the project

Now it’s time to code, so let me introduce my project: The Turnantenna.

As its name suggests, the Turnantenna is a directional antenna paired with an engine that should be remotely controlled.

The advantages of having such a system are:

Think about all the times that you had to reach the antenna to change it’s orientation. Now you can cut down this practice!

The Turnantenna was designed from and idea of Salvatore Moretti, another member of the Ninux community. With the other Ninuxers we made a working prototype of the Turnantenna, but now all the project should be improved.

The electrical scheme and a render are shown below. 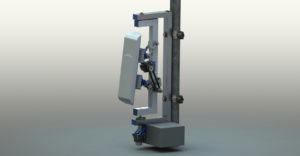 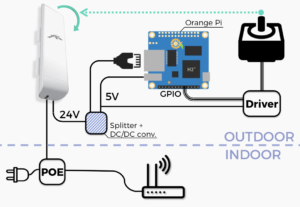 The goal in the next month is to write down a new driver for the two engines, and to make them work through HTTP APIs. The orientation of the antenna will be changed interacting from a dedicated web page (that will be shaped in the next month) or sending HTTP requests; in the last month I’ll publish all the documentation and packaging the application with PIP.

I wish to thank all the Freifunk members for the reception, and for giving me  the opportunity of being part of the Google Summer of Code this year.

I’d like to express my sincere thanks to all of the Ninuxers that helped and are still helping me in this adventure. I love you guys!