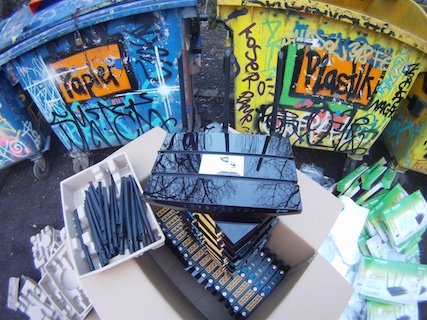 Listen to the podcast of the Wireless Battle of the Mesh 2013 in Aalborg here or on Soundcloud.

Unboxing Routers on the Table at Battlemesh event

some from Wireless Communities worldwide met in Aalborg University to have a whole week to make test for some routing protocols, that are able to make wifi communications possible for mesh networking. these are some cuts from interviews with that people at the last night, when they were going out for party and to sum up that week.

The Battlemesh event that aims at bringing together people from across Europe to test the performance of different routing protocols for ad-hoc networks, like Babel, B.A.T.M.A.N., BMX, OLSR, 802.11s and Static Routing. It is a tournament with a social character. The goal of the WirelessBattleMesh events is to set-up hands-on testbed for each available mesh routing protocol with a standard test procedure for the different mesh networks.